Although not as big as a household name as Seiko or Rolex, Junkers Watches still holds a high place in the world of watchmaking. This German brand has an interesting history that precedes the production of its well-designed watches.

Let’s take a look into what makes Junkers Watches the German giant that it is.

Junkers Watches is a German watchmaking company that produces high-quality watches that could rival those of Swiss manufacture. The brand is known for producing beautifully crafted aviation watches as the company has notable ties in the aircraft industries. Since its branching out into the watch industry, the company has produced 11 series and 59 models.

From military aircraft to sleek leather watches, Junkers has had quite an interesting history since its conception in 1895. The company was founded by Hugo Junkers, a German aircraft engineer and designer. Junkers initially sold boilers and radiators, but then gained a significant role in the production of military aircraft in World War I. It even pioneered the use of all-metal aircraft. The company has made several achievements in its existence such as producing the first all-metal aircraft, flying world-record flights, and spearheading numerous aircraft innovations.

With its history in aviation, the company eventually came to produce aviation watches that serve pilots well. Junkers Watches is at the forefront of German watchmaking with designs that reflect the classic aviation look and those that pay tribute to the Bauhaus Movement ⁠— an art movement that Hugo Junkers himself was heavily involved in.

With several high-grade watches in different collections, it would be quite a task to feature each and every one. So we’ve curated a list of some of the brand’s best collections and top models.

Junkers Watches has produced a good number of watch collections whose names hold much significance to the company’s history and brand. Here are a couple of these series and the best watches each series has to offer.

This famous collection from Junkers takes inspiration from the Bauhaus movement, which Hugo Junkers himself helped sponsor. The movement aims to unify fine arts with applied arts in modern design. Junkers incorporates this in their Bauhaus Series as seen in the reduced design of the watches.

One of the watches under this series is the Junkers Bauhaus Series 6060-2. It beautifully shows off the Bauhaus design with its sleek and simple silver on black look. Reviewers love it for its “beautifully designed and engineered case”  and overall quality of the watch. However, some have complained about the rotor sound being too loud. But if that’s not such a big deal to you, then this watch is surely a keeper. 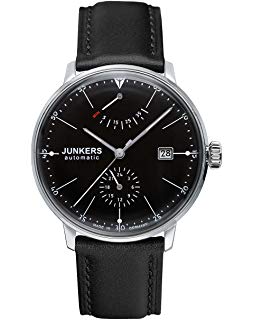 Not forgetting its roots in the aircraft industry, Junkers Watches pays tribute to its foundation by naming some of its collections after the Junkers planes. One, in particular, is the Junkers G38. The G38 was a large-scale transport aircraft that first took off in 1929. Now, the Junkers G38 refers to the sleek collection of watches manufactured by Junkers.

The Junkers G38 6944-5 is a notable watch from this collection. It sports a nice, subtle style that customers love and it comes at an affordable price. 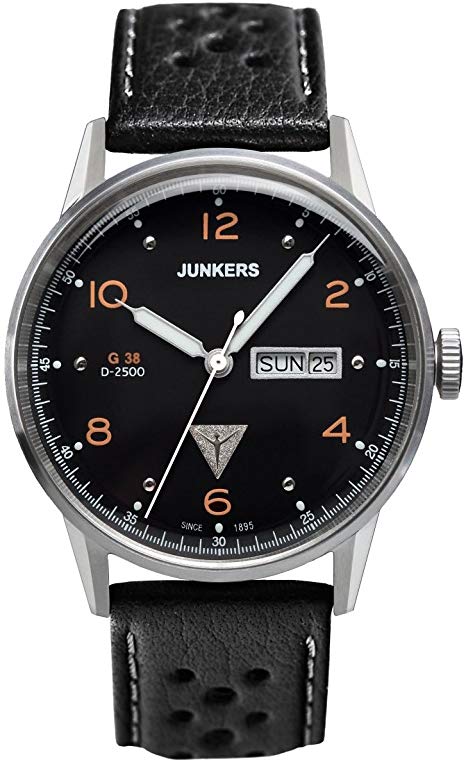 The Eisvogel F13 stands as a tribute to the company’s origins in flight. Eisvogel is the German word for the kingfisher, while the F13 is one of Junkers’ old planes. The Junkers F13 is actually considered the world’s first all-metal commercial aircraft, making it one of the company’s most iconic planes.

For this collection, we’ll be featuring the Eisvogel F13 6734-2. It sports a gorgeous and classy design and is easy to read. Reviewers, however, found some difficulty in syncing the hands. But overall, customers were pleased with this Eisvogel F13 watch. 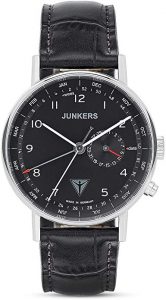 As yet another ode to the aviation industry, Junkers Watches released a line of watches called Junkers Cockpit. These watches hold the classic design of aviation or pilot watches.

The Cockpit JU52 6178-2 is one of the watches under this collection. This watch is easy to read and well-made, with just some minor errors. Some reviewers have noticed that the watch’s second hand does not exactly rest on the zero mark. Despite this tiny imperfection, customers still love the watch for its beautiful design and because they find it comfortable to wear. 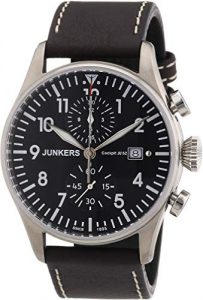 The last collection we’ll feature here is one lovingly named after the company’s founder, Mr. Hugo Junkers himself. Of course, with his impact in both aircraft engineering and design and German watchmaking, it is only fit to release a collection of watches as a tribute.

One of the watches under the Hugo Junkers collection is the 6650-2. Despite its large size, the watch is actually quite comfortable to wear. Customers love the look but complain that the watch runs a little slow. But with some minor adjustments here and there, reviewers find it to not be that big of a deal and still are delighted with their purchase. 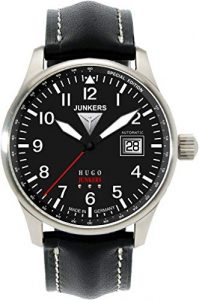 Now that we’ve taken a look at some of the best collections Junkers Watches has to offer, let’s examine some of the individual models (regardless of series) that make the brand proud.

This simple yet elegant watch is part of the iconic Junkers Bauhaus series. As it draws inspiration from the art movement, the watch’s design has a clean, minimalistic look to it. It has a classic cream-ish white background with a nice brown leather strap. Customers have praised the design of the watch, stating the diversity of use ⁠— as the watch can both be worn with a formal look and also pair well with the ordinary shirt and jeans combo. However, some have also pointed out minor kinks such as a tendency to scratch or low luminescence in the dark. 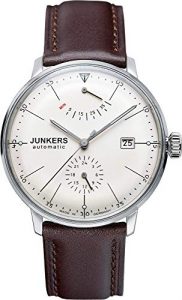 The next watch we’ll be featuring on this list comes from the Mountain Wave Project Series. This watch sports a cool blue dial and a matching dark blue band. Satisfied customers love that it’s easy to read with the striking white numbers and clock hands contrasting well with the deep blue background. 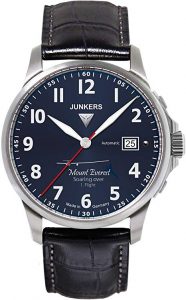 Yet another contender from the Bauhaus series, we have the Junkers Bauhaus Automatic 6050-2. Staying true to the Bauhaus style, this watch is quite sleek and simple. It has a simple silver on black look, which can never go wrong. You can wear it at formal events or have it as a day-to-day watch. The only downside to this elegant watch is its glass which could easily collect a few scratches. 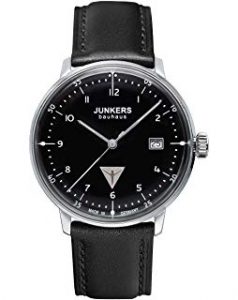 This hefty watch comes from the Hugo Junkers collection. It’s nice and big, weighing 77 grams and sports a nice black, white, red color combination. With the large numbers and excellent luminescence, customers find the watch quite easy to read. Although satisfied overall, some reviewers have noticed a squeaking sound in the leather band. However, they found that the sound eventually goes away after some time of consequent use. 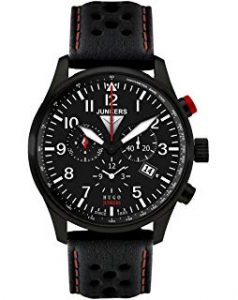 Part of the Cockpit series, the last (but not least) watch on our list is the Cockpit JU52 6144-3. Customers hold high praise for the design of this watch. The watch sports a red and white striped hour hand, a bright yellow minute hand, and an arrowhead at the end of the white second hand. This is complemented with big white numbers and markers on black dial. Customers, however, complain about the second hand not lining up with the markers and low visibility of the hands in the darkness. But overall, reviewers say it offers good value for its price. 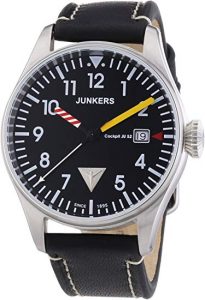 What makes Junkers Watches the success that it is? Well, it’s not just the individual models or even collections. It lies in the consistency of quality. Junkers Watches never fails to continuously produce high-quality watches. And this quality stems from the craftsmanship, design, and value the company puts into its watches.

One of the things that contribute to the brand’s competitive edge is the expert craftsmanship found in each watch. When it comes to European watches, Swiss-made watches are often considered to be the very best. However, the craftsmanship found in Junkers Watches reminds you to not quickly dismiss German-made ones. With a background in engineering, founder Hugo Junkers ensured that the watches he produces are all well-engineered and reliable.

This is one aspect the brand possesses that keeps customers coming back. As previously mentioned, Hugo Junkers was heavily involved in the Bauhaus Movement. It was something near and dear to him, and thus many of his watches incorporate the Bauhaus design. The beautiful, minimalist look of the Junkers Watches give it a flair of elegance in its simplicity. This classy look paves the way for the watch’s diversity of use. People love it so much because purchasing a Junkers Bauhaus watch is, in itself, an investment. In that purchase, people have a watch for all occasions ⁠— be it formal or casual. This is what you get when you put much thought into an object’s design, which Junkers Watches consistently does.

You get what you pay for, but sometimes, you don’t. Luckily with Junkers Watches, you don’t have to worry about whether you’ve gotten your money’s worth or not. With the price and the quality you get from that price, people can agree that you will most likely get great value from a Junkers Watch.

In the market for high-quality watches that won’t break the bank? Check our comprehensive feature on Best Watches Under $1,000. 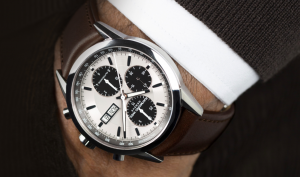 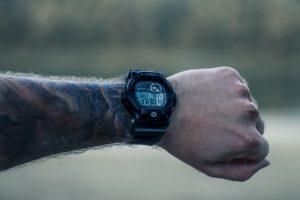 Everything You Need to Know About the Casio Mudman 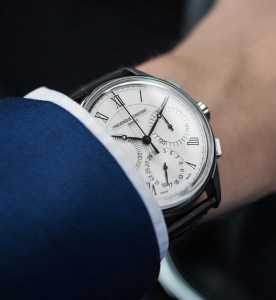 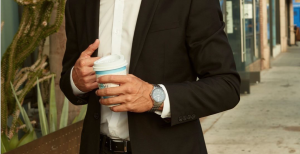